New Customer Chat plug-in: wider scope of chatbot use through the improved infrastructure

Facebook announced a chat plug-in on Messenger Platform 2.2 will be soon available. This means a gradual but important opening-up of the messenger to the rest of the internet, or to be more exact, to websites.

We all recall that in 2016, KLM was one of the first companies to direct their customers from the website on to messenger via the messenger button. In this way they could provide them with relevant information about their flights.

Today, Facebook complemented this button. The chat plug-in enables the communication transfer between customers and users to Facebook Messenger. In this way, the customer support staff can take over the conversation, or a chatbot can be used to guide the customer through the solution process. The best option perhaps would involve a mix of both.

Ultimately, this chat plug-in finds its place in the context of chatbots, because it enables chatbots to be easily discovered– which had previously been problematic.

Sure, companies still have to ensure the visibility of their chatbots, with sponsored messages or sponsored ads in their newsfeed for instance, but with a company’s website, the Facebook Messenger now has a prominent touchpoint in the customer journey, which will lead ultimately to more users of the messenger.

The new plug-in is beneficial for companies, because it enables an infrastructure for customer communication via messenger. Now, all features, which partly already existed, like payments, natural language programming (NLP), rich media etc., can be displayed all together.

Broadcast API: MessengerPeople to become even faster for it’s customers

The announced interface comes at an appropriate time, since it enables successful companies, such as our customer HolidayPirates, to broadcast messages even faster to their subscribers.

All further features concerning the latest Messenger Platform 2.2. update can be found in Facebook’s developer documentation. 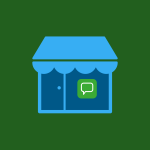 WhatsApp for Business Is Out! Android, SMBs, Verified Accounts – 1.3 billion users can now chat with businesses!News