Overview: The Messenger from Meta for Companies

With roughly one billion active users globally, the Facebook Messenger from Meta is one of the most popular messaging channels in the world. But what opportunities does it offer for businesses? In the following overview, we’ll take a look at current user numbers, business features, marketing capabilities, and opportunities the Facebook Messenger offers for companies.

Is the Facebook Messenger interesting for businesses? What can you do with it? And what is the current user base? In the following overview, we answer the most important questions around Meta’s Messenger.

In this article, we will cover:

It’s become clear in the past years, that Meta and CEO Mark Zuckerberg want to focus more on conversational messaging. Already in 2016, Zuckerberg declared the Messenger a top priority. 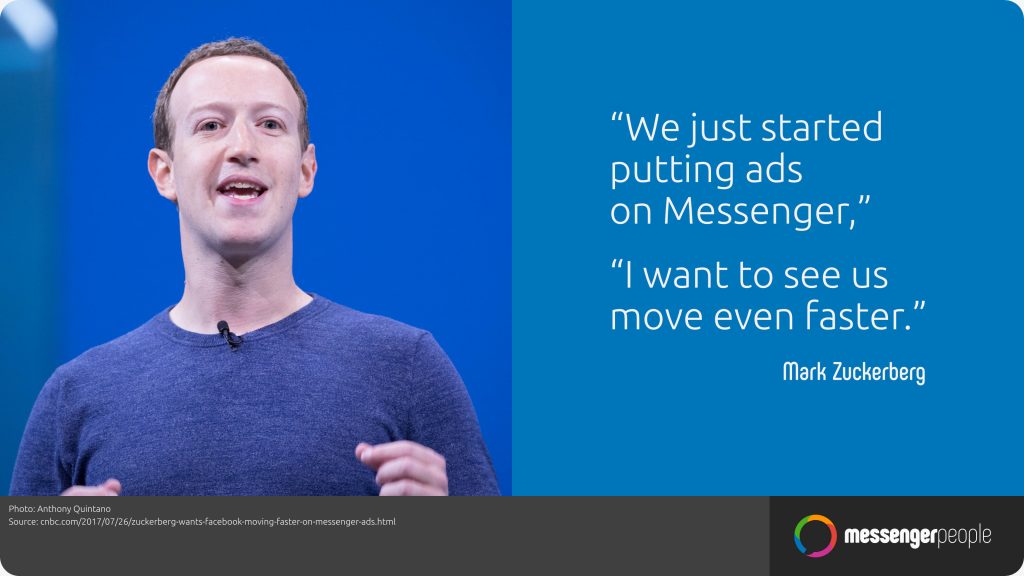 David Marcus, who ran the Facebook Messenger unit from 2014 to 2018 made it clear that using messaging as a marketing channel was no longer “if”, but “when”.

Since then, the Messenger from Meta has gone through some changes and upheavals, from criticism over the safety of the messenger app to restricting the newsletter usage due to spam and abuse, to now opening the Facebook Messenger to more business features. In May 2022, Mark Zuckerberg announced that the company was working on subscription models for its entire messaging family, which will most likely add more tools for companies to the Facebook Messenger as well.

Over the years, the Facebook Messenger has become an exciting channel for companies with many opportunities from customer service. 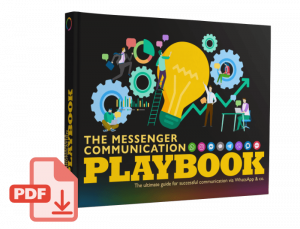 The Ultimate Business Guide to Messaging
Learn how to leverage the Facebook Messenger and other messaging apps to reach more customers—based on global examples from different industries.

Taking a look at user numbers of the Facebook Messenger globally, the app has lost popularity in the past few years. Even though Meta has not released any user numbers recently, based on ad users on the platform, experts estimate that the app has currently 988 million monthly active users. In 2020, this number was 1.3 billion.

Some of the reasons are that younger users prefer other apps like WhatsApp, Snapchat, or TikTok, while new messenger services like Telegram are also gaining more popularity around the world.

According to data from We Are Social, Hootsuite, and DataReportal, this makes the Messenger from Meta currently the number three messenger service in the world. 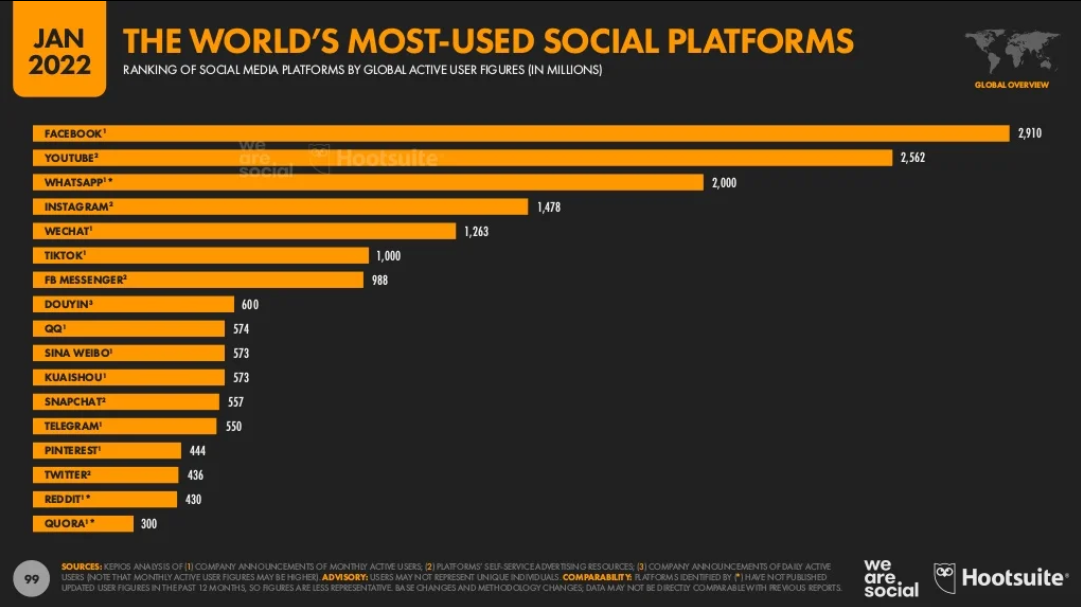 As far as user demographics, the Facebook Messenger is typically most popular among the age group of 25 to 35.

Keep in mind, though, that, depending on the market and the use case, the Facebook Messenger is still one of the top messaging apps globally. In the following, we will focus on a few selected markets that are particularly interesting for the business usage of the Messenger from Meta.

Facebook Messenger users in India, UK, US, Brazil, and Mexico

Based on market share, the Facebook Messenger is also popular in North America and the UK. In the US, 49 percent of social media users are on the app, and in the UK it’s 52.8 percent.

According to a recent survey in the UK, the brand awareness of the Messenger from Meta reaches 98 percent, with a user loyalty of 52 percent. 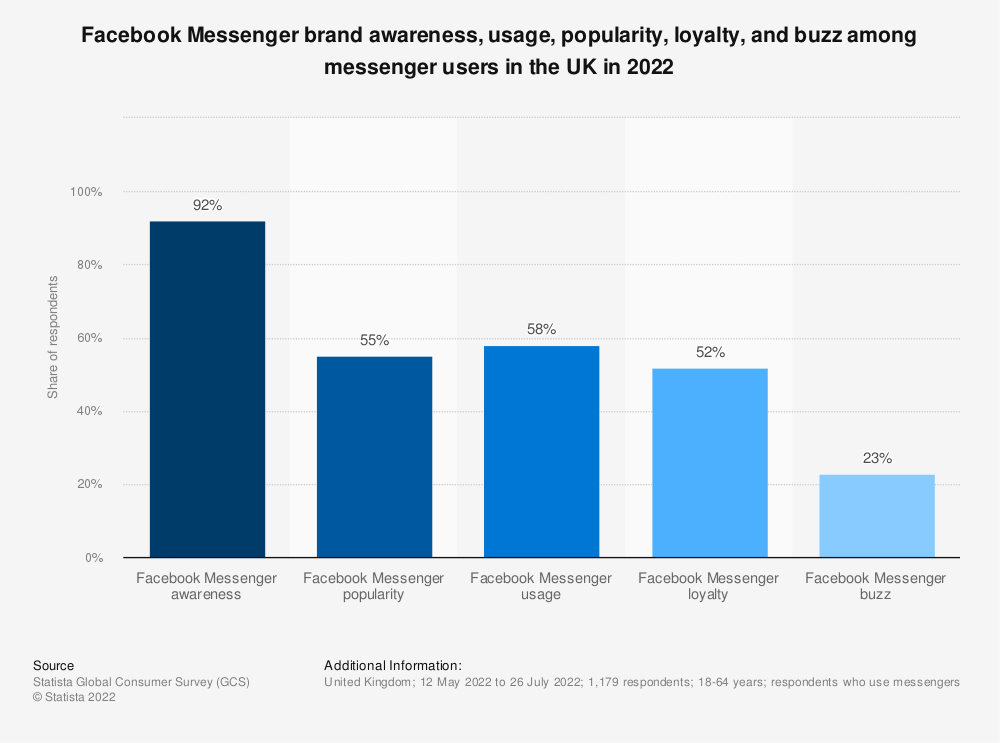 The Facebook Messenger has an extremely high brand awareness in the UK. (Source: Statista)

In the US, the brand awareness is a bit lower than in the UK (93 percent), but the Facebook Messenger has very strong popularity, usage and loyalty numbers in this market. 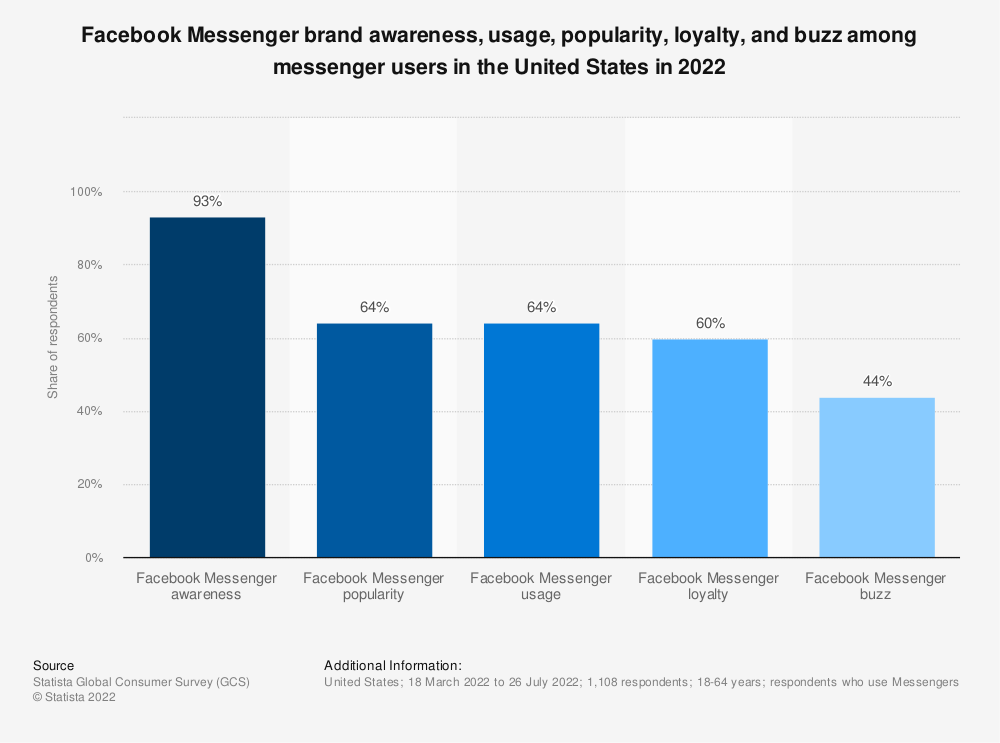 The Facebook Messenger has a very high user loyalty in the US. (Source: Statista)

💡 For more detailed information on social media and messenger app usage, check out our global overview with the latest numbers.

Meta has also set up a payment feature, Meta Pay (formerly: Facebook Pay) that allows users to connect the messaging app with their credit card to make in-chat payments to other users or businesses. This is a feature that Meta is actively rolling out step by step globally on WhatsApp and Instagram Direct as well.

The Facebook Messenger is not only an app that people use privately to talk to family and friends, they also increasingly use it to get in touch with businesses. Overall, more than one billion users message a business on the Meta family of messaging apps every week. 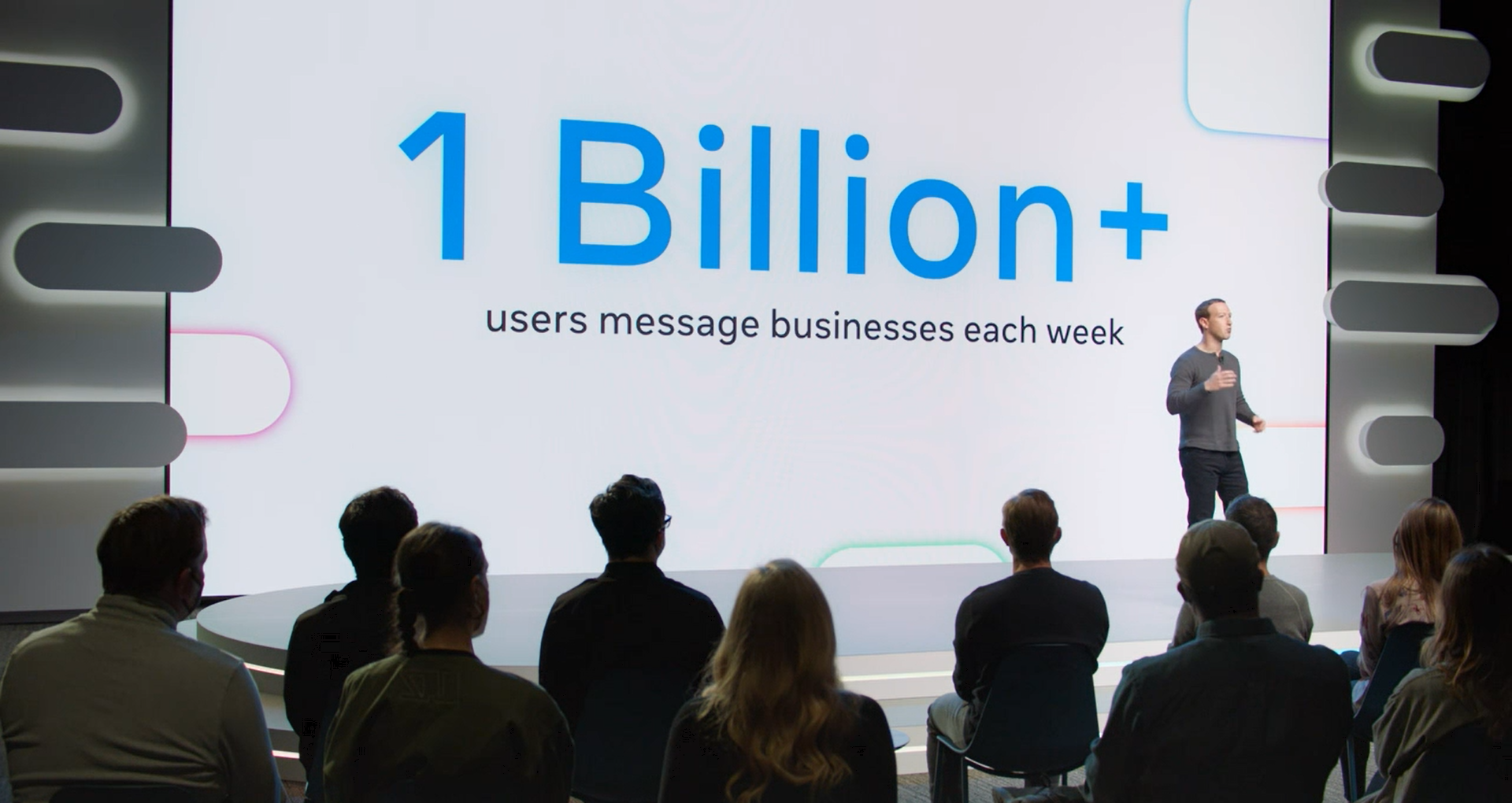 In fact, most users are also more likely to buy something from a business if they can chat with them. 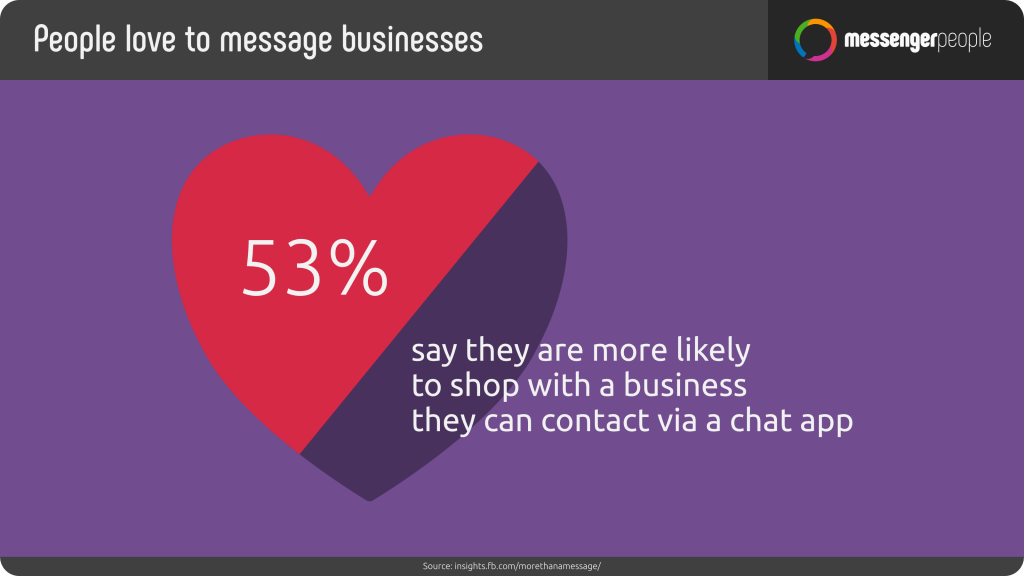 Offering customer communication on the Facebook Messenger is therefore an interesting option for companies. It can increase engagement, speed up customer service processes, and lead to better conversions and more sales–especially if your company already has a business profile on Facebook.

The Facebook Messenger is an important addition to our overall Facebook presence with more than 30,000 fans. This makes it possible for us to talk to our fan community directly and easily in the one-on-one chat.

Facebook was one of the first platforms to integrate chatbots into their messaging platform. This can be a simple rule-based bot, or a more complex AI chatbot. Overall though, for companies, this is a very exciting feature, that can pull its weight from lead generation to customer service.

Customer service bots on the Messenger from Meta

As many customers might explore a business profile on Facebook, it makes sense to offer them the possibility to contact the business on the same channel.

Let’s say a customer is looking at the Facebook page of a restaurant, but has a question about the menu or business hours. Integrating a chatbot directly on the Facebook Messenger makes it easy for the customer to just send a message, and get an automated answer in seconds instead of having to call the restaurant.

The travel and review platform TripAdvisor, for example, uses a Facebook bot to answer frequent user questions, but also to give travel tips. 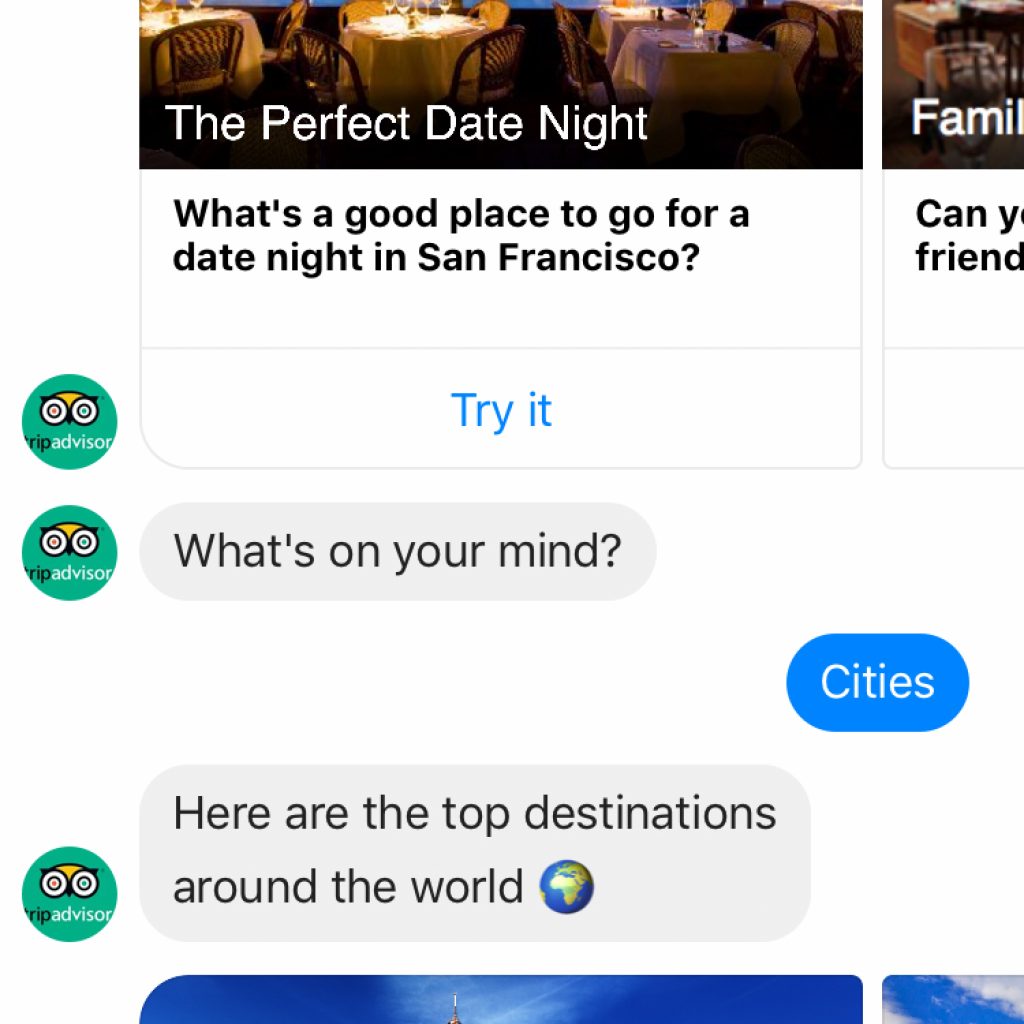 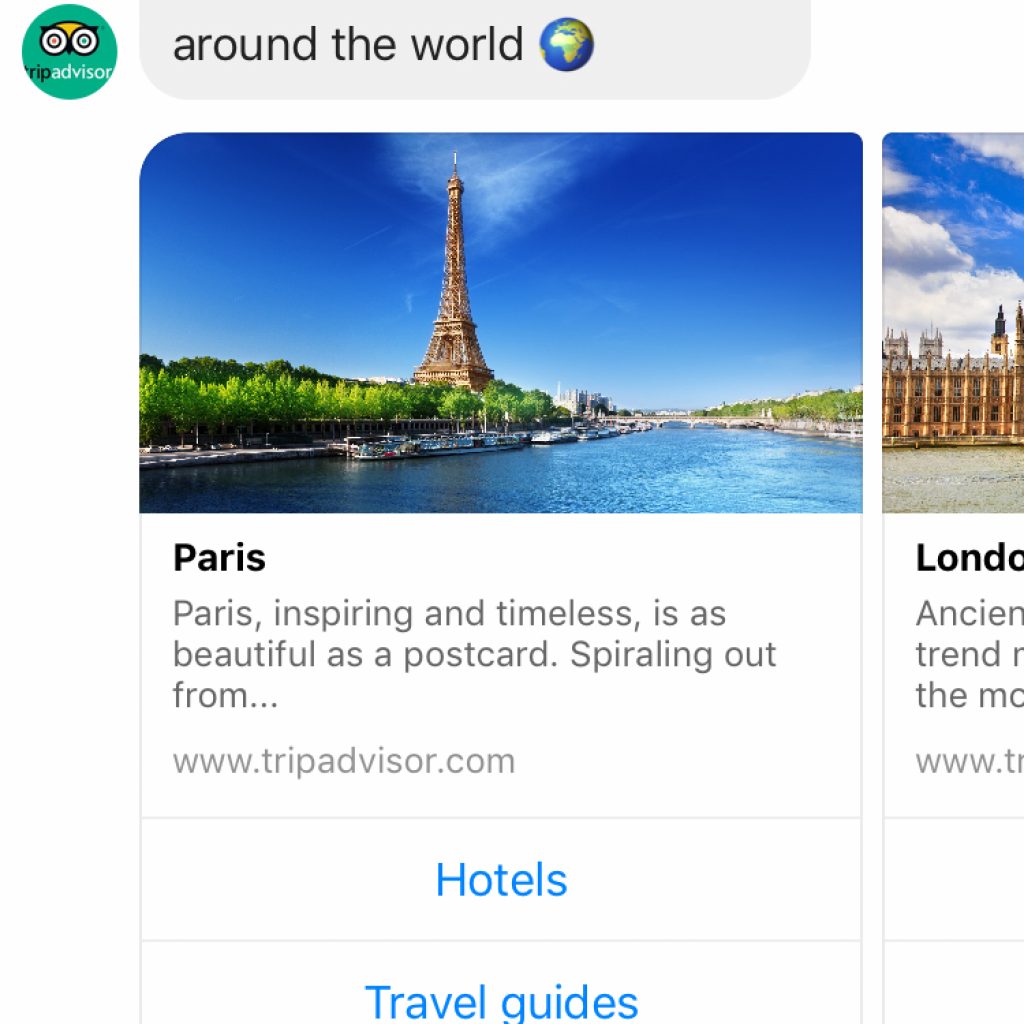 The beauty brand Sephora also uses a Facebook Messenger chatbot for answering queries on time and at scale. After they first integrated the bot in 2019, they measured the following results:

This shows the great potential of combining a Facebook presence with the Messenger and a customer service bot.

💡 Check out 10 inspiring customer service examples of brands on the Facebook Messenger.

One of the strengths of Facebook Messenger bots is, that due to the combination of the Facebook site, the messaging features, and their automation capabilities they can offer a lot of additional value for companies in generating leads and help with customer acquisition. This typically works in three steps:

You also don’t have to limit the functions of your chatbot to just one aspect. The designer brand Michael Kors, for instance, uses a multipurpose chatbot on the Facebook Messenger. It can answer frequently asked questions, but also has a quiz feature for a fun game around the brand, and it also takes users through current collections to provide shopping inspiration. 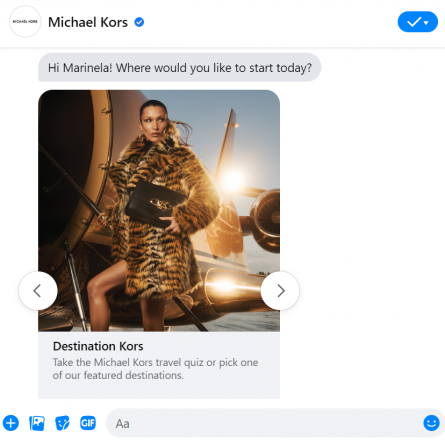 Companies can also run ads on the Facebook Messenger. There are two options: sponsored messages and Messenger ads.

Sponsored Messages: Companies can answer customer questions in a 24-hour window without charge. Outside this time frame, business-initiated messages come at a cost (sponsored messages). This means that companies can only initiate sponsored messages to customers, but these can then contain ads. Important: in order to avoid spam, you can only address users that have been in touch with you before as a target group.

Messenger ads: Users see these ads on the Messenger. They look very similar to the ads that people see on their Facebook newsfeed.

Recurring messages on the Facebook Messenger can be anything from special deals, weekly promotions, news, marketing messages, or updates. Of course, you can only send out recurring messages if users have previously opted in. Users can also decide how often they want to receive updates, and after a certain time period, they get an automated notification to re-confirm that they still want to receive newsletters. 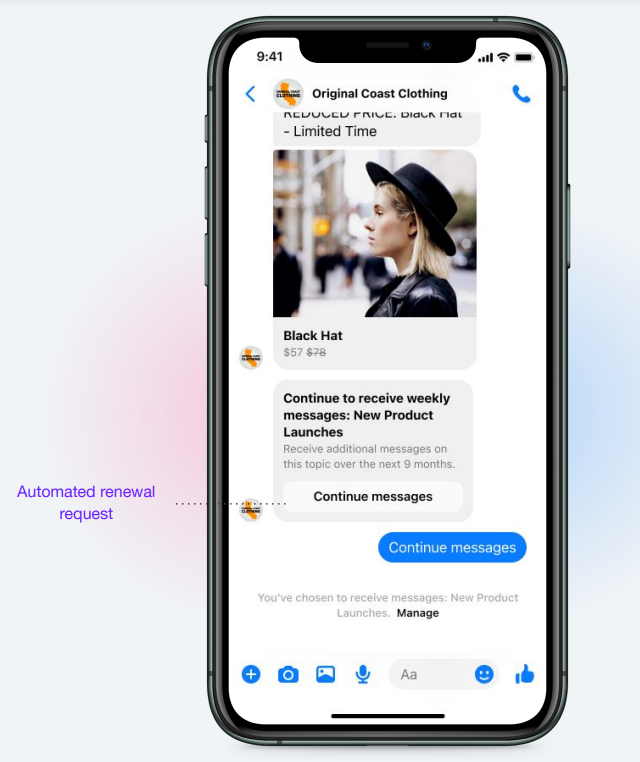 Opt-in and renewal requests are new features of the Facebook newsletter. (Source: Meta)

Until very recently, Facebook only allowed media companies that were listed on the News Page Index (NPI) to send out recurring notifications. However, in May 2022, the company decided to let all businesses use the feature again.

Since then, some first-movers have reported impressive results. Some companies achieved:

The e-commerce company ChicMe was one of these brands. The company was looking for an alternative channel to reach their customers beyond e-mail or SMS. They used the recurring notifications on Facebook Messenger to send out daily deals. As an incentive, customers received coupons if they signed up for the newsletter. 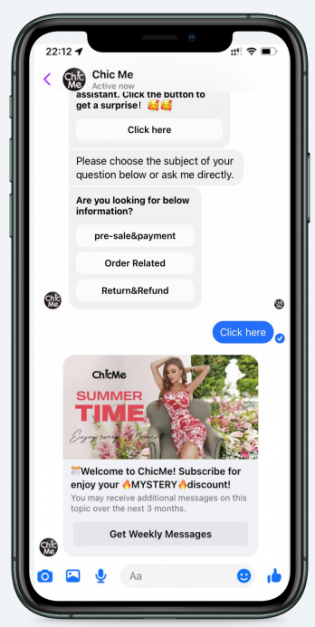 With the newsletter, they registered a 79 percent increase in open rate, and a 13 times increase in revenue (compared to e-mail campaigns). This shows how the Facebook Messenger can be an effective sales tool as well.

Always the latest messaging news with our newsletter

6. Software solution for using the Facebook Messenger for your customer communication

Similar to WhatsApp, a lot of the business features on the Facebook Messenger can only be unlocked for companies that are connected to the API. For example, the Application Programming Interface allows businesses to send out newsletters or integrate bots.

You can set up your own infrastructure to connect to Meta’s API cloud. This is free, at least for now, but Meta has already announced a paid subscription model for the future) However, this does require IT knowledge and resources. The other option is to work with a Meta Business Solution Provider, such as MessengerPeople by Sinch, who have developed ready-to-go software solutions that not only connect you to the API, but also allow you to get started on the Facebook Messenger right away.

The Messenger Commuication Platform from MessengerPeople by Sinch requires no coding skills, and lets you use all the business features on the Facebook Messenger. In addition, you can also use other messaging channels, such as WhatsApp, Instagram Direct, Telegram, or Apple Messages for Business for your customer communication.

All the conversations run on one centralized desktop platform (ensuring 100 percent data protection), so you won’t have to switch from one messaging app to another, and you can also integrate your CRM system. It’s the easiest way to start your effective and engaging customer communication on the Facebook Messenger and other messaging apps! 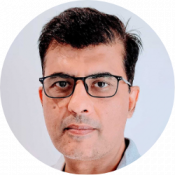 Check out what our platform can do for your business
Schedule a live demo with our messaging experts!

Newsletters for Messaging Apps: Everything You Need to Know!

How to set up the Messenger on Facebook for your business, in just two easy steps 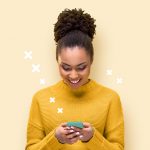 How to combine customer service and messaging apps: everything you need to knowContent Types, Magazine, Messenger Communication 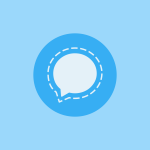