Mark Zuckerberg and his team kicked off the F8 2019 with a strong message: “If we would rebuild the Facebook platform today, we would focus it on messaging”. Facebook wants to guarantee privacy and concentrate on secure 1:1 communication. How does this affect messaging apps and which features are being developed for businesses?

Zuckerberg started off the keynote speech by saying that Facebook is pivoting in a new direction, because they think that “users want a privacy-focused social platform.” Facebook will focus on six main principles in their effort to become more secure and more private:

Zuckerberg wants users to have confidence that they’re able to interact privately via Facebook apps. The refrain echoed throughout the speech: “The future is private.”

Upping their security, the Facebook team plans to expand end to end encryption across their apps.

Something the team continually refers to is the fact that “ephemeral content” is important. They don’t want users to have to worry about their messages or posts being found years later.

One of the vaguer points, but Zuckerberg says he wants to make sure that Facebook is only used for good.

This was another buzzword for the conference, meaning that the Facebook apps can all interact with one another and don’t provide barriers for connections between people. This leads up to the eventual messaging app merger.

Here Zuckerberg again focuses on the impact that Facebook has around the globe and preventing any weaknesses. 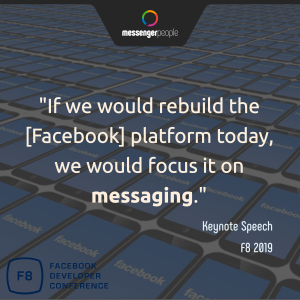 What do these 6 principles look like as concrete steps for the future? Among plans outlined for the different apps, the team said they are focused on strengthening the community aspect and raising interaction. Rather than “digital town squares” the team spoke about the “digital living room” – the focus changes from a completely open platform, to semi-open groups and communities and private messaging. Asha Sharma, the head of product for Messenger, says that if they recreated the social platform today, they would focus it on messaging.

What’s in store for Messenger?

The Facebook team wants users to have the best possible user experience on Facebook Messenger. They’ll create a standalone desktop app for Messenger. They’ll also make the app much faster and more reliable. Taking another cue from WhatsApp, they’ll also move to make end to end encryption standard for Messenger. They’ll redesign the app to be lighter and cleaner – but also to have a Friends tab where you can see messages and updates from your friends first. Users will also be able to watch videos together via Messenger. They will also include appointment booking capabilities directly in the Messenger API, something that will definitely be helpful for businesses using Messenger.

Our take: what does this mean for business messaging?

The Facebook pivot towards privacy, direct interaction, and more messaging confirms what has been circulating for many months now: that businesses need to move from the 1:n, push style communication and start engaging with customers 1:1. Facebook is focused on making customer-centric changes and developing its messaging apps to enhance the features that users want most. Facebook data says that on Messenger, 20 million messages are already sent between businesses and consumers per month. As more consumers want easier ways to contact businesses and brands, Facebook is developing this business-communication side of the Facebook universe – another launch they mentioned in the keynote are the new lead generation possibilities in Facebook ads. 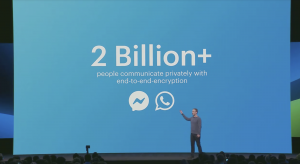 The focus on privacy and encryption can help reassure customers that messaging businesses is just as secure as contact over email or phone – and reposition Facebook as a security-focused business. As Facebook continues to talk about merging Messenger, WhatsApp, and Instagram Direct, it’ll be interesting to see how security is treated, and how the individual business features in the different apps work together. The developments will definitely take time and Facebook seems to be making slower, deliberate changes, but one thing is certain: from customer service, to conversational commerce, to presenting content in engaging ways, the focus on closed, private messaging is inevitable.

If you’re interested in sharing your thoughts about the F8 or learning more about how to use messaging apps for customer communication, send a quick message to our Messenger Experts – we’d love to be in touch!

Check out our coverage of the Facebook Live Q&A: The Future of Messaging for Businesses. 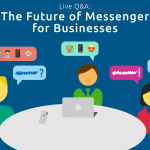 Live Blog – The Future of Facebook Messenger for BusinessesNews 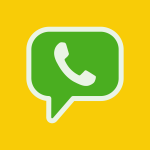